Pets come in all forms, shapes and sizes -- animate and otherwise. Some selections may be considered unorthodox by other people, but that doesn't deter me from considering unusual possibilities.

Praying Mantids and Lady Bugs have long fascinated me as have Walking Sticks, too. I planned to write about my experience with the mantid and the lady bugs earlier this year. Events did not develop quite as I expected so I could share pictures of matured creatures. Here's what happened.

This past spring when I entered a local hardware/garden store where I was confronted with a display selling containers of young lady bugs and praying mantids eggs. These two insects are natural predators who devour certain unwanted destructive bugs preying on any vegetables, flowers and other garden plants. I decided to splurge, unable to resist purchasing one container each of these insects. 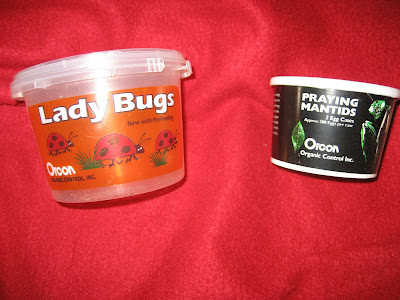 I intended to put the praying mantids egg-like container into a fishbowl per one recommended option so I could observe their gradual emergence once they developed to hatching stage. The more I thought about them, I even considered keeping a couple as pets since the instructions suggested that might be a possibility if I kept them fed -- ground meat was mentioned.

Unlike other pets I've had, they wouldn't have to be walked with the ever present plastic bag I'd have to tote so I could stoop over to pickup a stinky mess to carry along until disposing it later at home. Likewise there would be no need for rug clean-up after an inevitable sickness or potty accident. There would be no toiletry litter box inside the house threatening unwanted aromas if not replaced periodically. No messy hairballs, or urinary tract infections causing uncontrolled sense of urgency resulting in neutered male felines unintentionally spraying the guest room bed pillow. I certainly wouldn't be subjected either to those manipulative behaviors of eye gazes, cunning growls, or hypnotic purrs often emanating from some pets to which I often succumb much too easily. These prospective pets I was considering would be quiet, making not a sound.

There would be no fish bowl requiring water to be changed or containing new little ones to be protected from being eaten by their mother. I reasoned that I could always turn my pet praying mantids loose in a tree if unknown forces caused them to acquire unmanageably large proportions or they became vicious. They could fend for themselves and I wouldn't be reported to the Humane Society for cruelty, abuse or for abandoning my pet. I bet they wouldn't bother to come back home, either.

Time lapsed before I enacted my plan. Before I was ready I noted these young mantids were already escaping the brown paper-thin-like egg in which they had been placed to hatch. I could see quite a few of the tiny mantids were still inside the now broken egg-like structure so I hastily initiated the next step. I carried the brown egg container out to a flowering tree-like shrub in my back yard. I carefully placed the brown eggs in crooks of the branches as instructed, then emptied the remaining small mantids onto limbs where they presumably would find smaller insects to eat that compose their carnivorous diet. 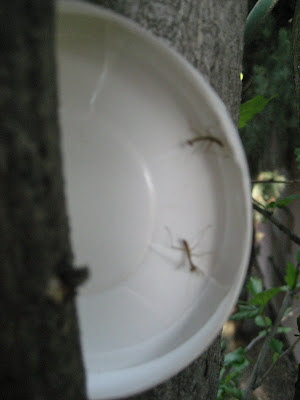 The lady bugs, full grown when I purchased them, were placed in similarly recommended potential feeding sites on a few patio potted dwarf fruit trees. I managed to get a couple pictures at the time I released both of these insect varieties but my photo offerings are limited as everything was happening so rapidly. 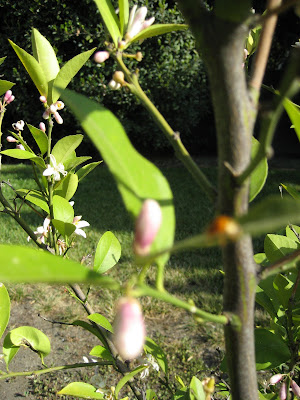 Subsequently through the days, weeks and months my anticipated sightings of matured mantids have not materialized for photographing. I know there was increased bird activity in the backyard after I released my baby insects so those winged predators may have feasted on some of my new small creatures. I should have stayed out there with them for a while instead of coming inside for my camera. The lady bugs who avoided being eaten may have eventually flown away. I choose to believe some of each of these insects have survived though I've been unable to sight any.

I think I'll try again next year seeding these insects in my outdoor growth if they're available for purchase at my store. Furthermore, I may just prepare for habitation a large fish bowl left over from our households years earlier pet creature activities. I'm through mourning the loss of my compost, worm juice producing wiggly farm some years ago. I may decide to have pets again.
Posted by joared at 8/31/2009 12:08:00 AM 8 comments

Senator Kennedy was buried at Arlington National Cemetery after the procession following the service.
Posted by joared at 8/30/2009 12:03:00 AM 2 comments

Sen. Edward Kennedy's Memorial Service Friday, August 28th included a tribute by John Culver that drew much loving laughter from those present. This is Part 1 from YouTube:

Edward Moore "Ted" Kennedy (February 22, 1932 – August 25, 2009) died as a consequence of a brain tumor he has been battling for some time. Detailed facts of his life, particulars about his family and his professional value as a United States Senator are being reported by more eloquent writers than I. Historians will report on this man whose actions had a significant positive impact on others lives. The following ITN YouTube video provides funeral plans to date.

I am most impressed with actions resulting from his dedication to championing the rights of ordinary citizens and especially those of the least among us. Our country, our governmental and political processes will be sadly lacking without his contributions. He has been a unique conciliatory force able to meld opposite views and ideas about controversial issues into meaningful results affecting us all.

One of his most championed goals has been to bring health care to every American. I wish he had been able to shepherd a plan through our legislative process. He expended his final energies toward that end despite his declining health. A fitting tribute would be formulation and passage of such legislation. I hope our legislative leaders can find the courage to act in a bi-partisan effort enacting such a bill our President can sign.

The goal of health care for all is a moral imperative to which everyone who truly cares about human rights should aspire. We need health care reform now.