Increasing numbers of Middle Eastern people are gathering in peaceful protests. Citizens in countries undergoing profound upheaval are literally dying for freedom since their despot, tyrannical leaders are resisting leaving. Unknown is what sort of replacement governments will emerge in these countries.

Fearsome to me is the thought they might end up with a government that is controlled by a religious group, as occurred with Iran’s revolution some years ago. A pairing of religion with a military force willing to shed their own people’s blood for such an autocratic theocracy is just as dangerous and oppressive as any dictatorial agnostic or atheistic leader.

No nation, including our own, is free of the danger from religious groups, often a minority in number, who are dedicated to imposing their personal beliefs on a whole population. If choice exists, it’s only with options they define. Make no mistake this is not freedom.

Current protesters marching in the U.S. are motivated by quite different reasons than those Middle Easterners. No blood is being shed here. They are protesting political government efforts to take rights from them – the right to collectively bargain with their public employer for recompense and working conditions. I recently heard an intelligent discussion on these issues.

One interesting point made was that typically in communities where the public sector groups with bargaining rights exist, their earnings coupled with benefits, are higher than those enjoyed by comparable private sector workers. This is being cited by the opposition as one reason for taking away these rights during these times when serious budgetary deficits are being experienced by all levels of government – local, state, and nationally.

But significantly, salaries and benefits become lower for all workers, public and private, where there is no collective bargaining.

One might wonder if employer profits are accordingly lower, also? If not, might we find that disparity unjust? Might we not wonder if the widening gap between the haves and have-nots would expand even more? Might we not see a further eroding of the middle class in our nation as we move toward becoming more like a third world country?

All U.S. workers would be well-advised to consider that if collective bargaining rights cease, not only public, but private sector wage-earners are likely to share the effects in ways they might not want, or have anticipated.

In connection with the protesters Dick Klade, former newspaper editor, who writes at "gabbygeezer" reports an interesting story (Mon. 2/21/11 post.) He briefly notes both sides of the bargaining argument, then describes the unique national and world wide support that protesters in Madison, Wisconsin are receiving. As the effort to end collective bargaining rights spreads to other states some people may want to adopt the support-from-a-distance measures being taken there by those protesting marchers who want to protect their bargaining rights.

Music has been on my mind since viewing the recent televised Grammy Awards that I intended to write about. Then, yesterday I was startled to receive an email informing me Columbus, Ohio pianist Bob Allen, a truly master musician, was experiencing a serious medical challenge. Bob has undergone a double leg amputation. My husband had regularly performed with Bob as part of a piano bass duo years ago.

The Columbus jazz community wants to help Bob by arranging a benefit concert. I am unable to attend but perhaps the information here will reach some interested readers, fans and friends.

Bob Allen’s music has been enjoyed for almost fifty years with his appearances in the U. S. and Canada. Bob Allen (Phrahin,) blind since birth, spent his early years in Cleveland, where he began studying piano at age six. He studied classical music, graduated from Capital University, played with symphonies, and teaches classical piano. Bob has created a distinctive musical style unmistakably his own with classical influences evident in jazz and pop standards.

“His arrangements encompass a wide range of musical idioms, from well-known standards to original compositions. He is noted for the classical touches which frequently adorn his work.”

Barbara Zuck wrote in the Columbus Dispatch newspaper a very descriptive account of an evening listening to The Bob Allen Trio in the lounge at Hyde Park Grille steakhouse in Upper Arlington, Ohio, north of Columbus. His Trio has appeared there regularly for numerous years having previously performed at various other area popular clubs, restaurants and lounges. Two of Bob’s most well-known Columbus music venues were The Maramor and The Christopher Inn (neither exist now) where famous entertainers including Mel Torme, Tony Bennett, George Shearing (a friend of Bob’s who died recently, also a blind pianist,) Carol Channing, Gordon and Sheila MacRae, Betty Hutton, Julie Wilson - Supperclub Chanteuse, and comedienne Phyllis Diller entertained to name only a few.

Ms Zuck shared her impression of one of Bob’s performances that she attended on an April 2006 night. I was reminded of a summer night three months later when I was in Columbus listening to the Trio after traveling from California to join family and friends. Earlier in the afternoon friends had arranged a special memorial service celebrating my recently deceased husband’s life during which Bob had graciously played a few special piano solo numbers. Ms Zuck wrote the following about her evening listening to Bob’s trio which was much as I experienced the night after the service.

“Midway through the first number, On the Street Where You Live, he [Bob] tore into an improvisation in the 18 th-century counterpoint style of Bach.
‘‘He is like an orchestra," said Paul Hickfang, professor emeritus at Ohio State University’s School of Music. ‘‘He is an orchestra. He commands your attention. He’s an artist with any and all genres of music. He makes me cry, and he’ll make you jump for joy with Bach, Mozart or the Beatles."

Ms Zuck continues:
“On that Saturday night, Allen teased listeners by dropping Rachmaninoff and Schumann into well-known tunes by Richard Rodgers and Henry Mancini.
‘‘I don’t always play what most people call jazz," he [Bob Allen] said. ‘‘I like to take a popular tune and use it as raw material for a composition so that the original song assumes lesser importance than the new piece I am playing. That’s good or bad, depending on how you feel about the song."

I first met Bob at a newly opened Stouffer’s University Inn on Olentangy River Road next to the WLWC-TV station north of Ohio State University where I worked when I first began dating my future husband. My husband-to-be, Morrie, was part of a duo accompanying on bass Bob’s already special piano arrangements. A year or so later the spectacular new Christopher Inn opened down town where the duo began playing regularly. By that time Morrie and I were married. Many of the famous entertainers appearing at The Maramor, or elsewhere, would stop by after their shows to listen to Bob. We moved away from the area, but Bob continued performing, and formed new groups through the succeeding years. The Inn supported Bob recording a 33 1/3 rpm vinyl album of his then trio, a copy of which we were able to obtain when we later visited town and I still have. Bob confirmed a humorous story Ms Zuck relates in her article about Phyllis Diller’s outspoken forceful reaction to an inconsiderate noisy audience member when he was performing. Ms Diller had stopped by to hear Bob play one night after her Maramor appearance.

The Bob Allen Trio of recent years has consisted of Roger Hines bassist and Joe Ong, percussionist. Hines was musical director touring with Grammy Award-winning jazz vocalist Diane Schuur. He also toured and recorded with Ray Charles until Charles death in 2004. Ong has studied at Bowling Green State University, Capital University, and lectured at Ohio State University. His performances have included tours in the United States and Europe.

"The Columbus Jazz Orchestra (CJO) was formed as a vehicle to create performance opportunities for jazz musicians in a big band setting,for over 35 years…the CJO audience has the largest jazz orchestra subscription base in the United States. The CJO performs an outdoor summer concert series, JazZoo!, at the Columbus Zoo and Aquarium. JAG has broadened its performance scope by presenting a contemporary music series. The Jazz Arts Group believes in the power of music to transform lives and is committed to offering lifelong-learning opportunities for individuals of all ages, interests, backgrounds and abilities."

I hope the power of music will sustain Bob Allen in his recovery. I look forward to his return to the piano’s 88 ivorys and any adaptations he may choose. Perhaps there will be demand for a re-issue of his unique music creations from some of his previous LP and/or CD recordings.
Posted by joared at 2/20/2011 04:10:00 AM 10 comments

Baby up date here delayed due to this Grandmother having technical function glitch. My computer guru consultant's attention has been necessarily focused on family expansion he describes in an email with pictures he sent the day after the big event. (I edited slightly in interest of privacy.)

“Announcing some big doin's! Much has changed in the last 24 hours. The universe has expanded approximately 3.8 billion miles. Roughly 27.1 billion snowflakes settled on our Great Lakes State’s city. And future poet, adventurer, philosopher, X-gamer, and animal companion, grandson, snuck into this world via secret hatch.

“His being, like that of the collective family, is one of infinite mystery to be revealed slowly over decades, perhaps centuries. But some secrets are evident:

“Much remains to be discovered, but initial clues indicate vast treasure.” 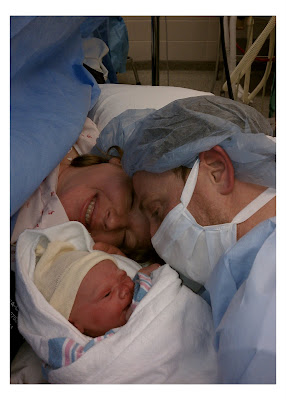 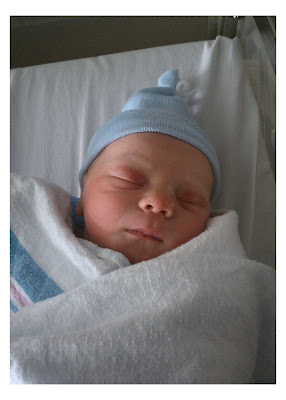 I can’t keep it to myself any longer. I’m going to be a grandmother any time now. I must admit to getting a bit edgy this past weekend when I realized our West Coast weather headed east was expected to develop into a truly severe icy/snow storm. The storm’s path is through those Great Lakes states where my grandson is slated to make his grand entrance into this world.

Sunday, I texted my son and his wife a 'heads up' that "our storm is headed your way." I asked if they had a Plan B should this first child of theirs enter our world on a schedule coinciding with the storm’s arrival. I’ve been relieved to learn they’ve gone to the hospital birthing setting preparatory to the big event, which will likely be occurring soon – or could be happening now.

I’ll share the news when I learn of my grandson’s debut entering the scene in life’s great theatre’. Yeah, I know that reads a bit over the top, but if you could hear my voice speaking those words you’d know the grandeur is all exuberant fun reflecting my excited state.
Posted by joared at 2/01/2011 03:55:00 AM 8 comments