"Believe in Music" emphasizes the proven benefits of playing music in their float's message from NAMM (International Music Products Assn.,) Sesame Workshop and Music For All. We caught sight of familiar Sesame Street characters including Big Bird and original cast member, Bob McGrath. Joining the group later was Oscar the Grouch peering from his trash can abode. 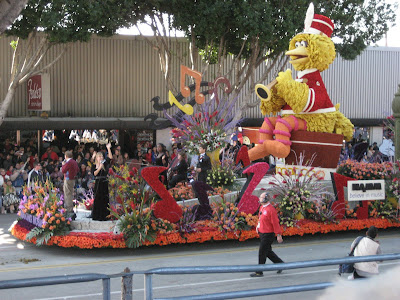 "Bands of America Honor Band" supported by the same groups above brings together more than 300 highly talented students from 200 high schools for this opportunity to march in the Rose Parade led by Indianapolis, Indiana Band Director, George Parks.

"Entertaining Dreams for a Century" celebrates Roseville, California's Centennial with a nearly life-size replica of a 1909 Union Pacific engine that made a historic trip from that city to Sacramento. This is their first Rose Parade float. They include tribute to their Indian community, nature and spectacular environment at the base of the Sierra Nevada Mountains. 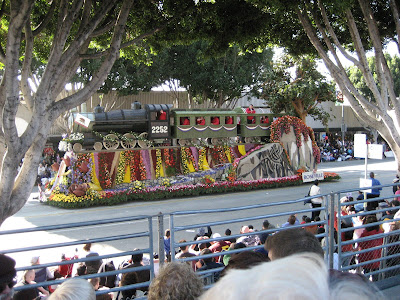 "The Making of an Epic" pays tribute to Hollywood's Golden Era courtesy of the longest running float entrant for the 56th year by FTD. 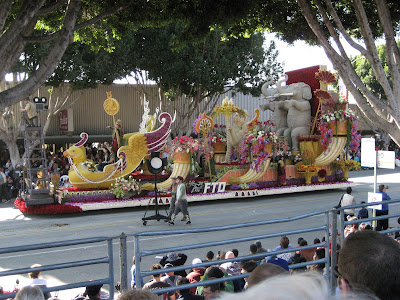 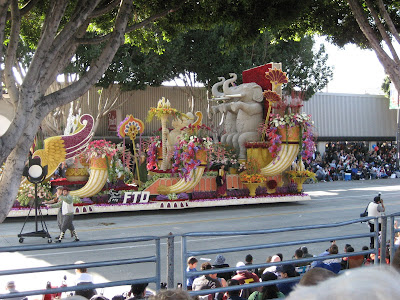 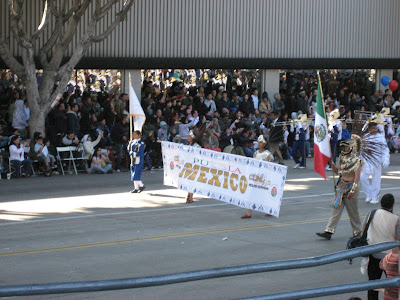 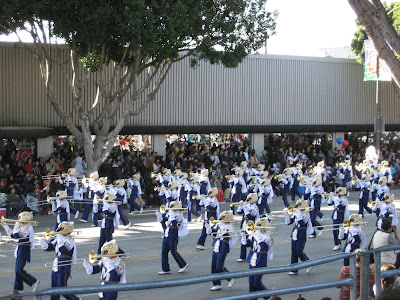 "Surf City USA" from the City of Huntington Beach features a family riding a huge ocean wave. The surfer was partially hidden from us due to the trees, so we had to wait until the Blvd. corner was rounded to fully appreciate the float. 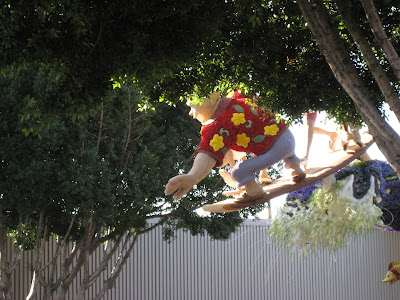 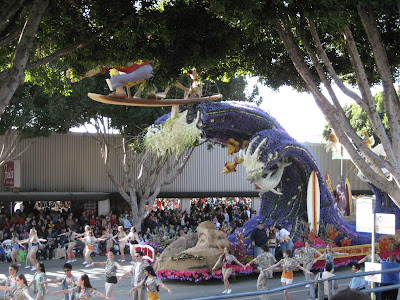 Liberty High School Grenadier Band, Bethlehem, Pennsylvania, Directed by Gregory MacGill has performed in London, throughout the United Kingdom, the United States and Canada. Their uniform includes Royal Stewart tartan imported from Scotland for the bagpipers' kilts and majorettes' skirts.

There were 89 Rose Parade entries listed in the official program. I haven't shown all the parade photos we took, nor were we even able to take pictures of all the floats and bands, especially toward the parade's end. My daughter's own photo shots were often hampered by a lady in front of us who frequently and suddenly raised her arm high in a constant 180 degree wave to everyone in the parade. Entry 67 of the Grenadier Band above was our last photo or video, so there were many more memorable sights and sounds we didn't record.

You can access Tournament of Roses 2009 highlights from the Parade.

The Pasadena Tournament of Roses Association awarded twenty-four trophies. You can view photos of each 2009 award winner when you scroll down to the link "Begin."

If there is a specific float for which someone desires to know what decorative vegetation, flowers, seeds, etc. were used, I can provide some information from my official Rose Parade Program. Leave your request in a comment or send an email to the "Contact Joared" address noted on this blog home page.

I have read reports the Rose Parade officials limited participant entry numbers to fewer in number than in past years. This was allegedly due to adjustments made to accommodate shortened television coverage time, especially during a time when commercial sponsorships lessen and our economy undergoes challenges.

There was no parade route viewer space to spare anywhere I looked. Many onlookers had camped out overnight along both sides of the parade route. There were crowds up and down the Boulevards with several people deep standing and others seated in stands such as those across the street from us.

The right side of the parade route often seems to be catered to by float performers since that's the location of television cameras at the parade's start.

The five and a half miles distance down Colorado and Sierra Madre Blvds. took its toll on those paraders on foot, including most of the marching bands. Their parade-beginning straight column lines we saw on the TV rebroadcast we watched after lunch, and returning home, were a contrast to the somewhat wavy horizontal lines we observed live when the marchers reached us just before their final turn onto Sierra Madre Blvd.

I noted at our end of the parade the animal-droppings-cleanup-scoopers I observed on television previous years were nowhere to be seen, but maybe they were just wherever the cameras were. We assumed this scooper brigade was either lacking in number to reach our part of the parade route, were all "scooped out," or erroneously concluded the animals, at least one of the horses, had no further business to unload. That assumption would have been wrong!

We watched with great apprehension as marchers with their eyes straight ahead sometimes "cut their foot" (a phrase whose meaning I recall learning in a farm's barnyard shared by cattle and horses.) Viewers in the parade stands could only sympathize from afar with each unfortunate marcher's plight. Later, further down the route we noticed an empty tennis shoe laying in the street and thought that individual's motivation must be strong to part with his or her shoe.

Sights I hadn't recalled seeing in previous years television viewing, but saw and heard in person, included a multitude of law enforcement vehicles driving by at the end of the parade. Emergency trucks and flatbeds followed bearing the names of more such businesses than I ever knew existed. Drivers of all of them were waving and sounding their horns creating a deafening cacophony of sound saying "Look at me!" I thought the auditory assault would never end. The vehicles were needed to transport all the floats to and from the parade as well as be available should they need to rescue any float breakdowns along the route. (We weren't aware of any such SOS needs.) By this time the stands were emptying and we were headed to our bus parked directly behind the stands, happy to have the noisy sounding horns muffled when we climbed aboard, then rode home.

Attending the 2009 Rose Parade was an enjoyable fun stress-free experience. We knew some people have their own camper or rent one they park overnight, but we appreciated not doing any driving for this event. I had splurged in the summer when we made our reservations and purchased inexpensive cushioned bleacher seats with backs, a very worthwhile investment I highly recommend.

We did learn of alternative ways we might be able to attend the Rose Parade in the future. We could drive part way, walk some short distances, use Metrolink/Metrorail, possibly independently reserve seats located in bleachers toward the beginning of the parade route near the television stands.

You may visit www.tournamentofroses.com for the latest official news as preparation begins for the 2010 Rose Parade.
Posted by joared at 2/08/2009 02:30:00 AM