Memories come to mind of my Mother born into the predominantly agrarian nineteenth century and her transition into the twentieth century industrial world. I wrote about some of her world last year on May 11th in “Mother’s Day Thoughts.”

These days when so many experience difficulties encountered as a consequence of a nation and world economic upheaval unlike any in my lifetime, I often wonder what my mother would have to say on the subject. She had become a young married woman during the twenties heydays preceding the Great Depression. I recall her descriptions of a none too easy early married life that evolved into a more prosperous existence in later years as occurs with many couples.

She said the hardships during that financial downturn did not directly adversely affect our family. They occurred before I was born later in her life. Our immunity to severe hardship was primarily because my father’s work was associated with the newspaper business. Newspapers were the primary source of news, so were in much demand by almost everyone regardless of their financial situation. In fact, two of the most prominent state newspapers were vying for his services.

Radio was just beginning with unprecedented broadcasting power thanks to Powell Crosley and the ultimate “Nation’s Station” WLW in Cincinnati, Ohio.

There was no TV yet, much less computers and the Internet of today. Newspapers were a primary source listing employment opportunities for those seeking work. People placed ads to sell belongings so they could raise some desperately needed cash while others with limited cash sought bargain prices as they needed these items but had little cash themselves. Everyone wanted to subscribe or at least access a newspaper. This is hardly the situation that exists today in the newspaper business.

During the Depression my mother continued to be active in her womens religious group. They devoted themselves to helping others in need, an activity in which she engaged for many of those years and throughout her lifetime when she was able.

A few years after I was born our fortunes changed and my mother became a single parent in a time when a woman raising a family alone had a very difficult time. My immediate family had never lived extravagantly, but as I entered my early childhood years I was absorbing from my mother the lessons of needing to be even more practical and frugal.

She was a remarkable woman who in her later years in the face of adversity when she became legally blind and limited in visual activities created unique hooked rugs that became unexpectedly desired by others. This is a one-of-a-kind small rectangular throw rug which she experimented hooking before her vision deteriorated even further necessitating larger different geometric patterning. My photography does not do the colors justice. My mother would be amused the tips of my shoes appear. 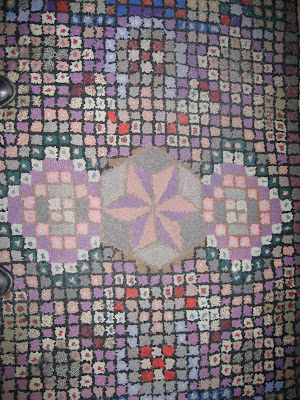 My mother had an amazingly optimistic and positive attitude toward life. She made multiple transitions and adaptations to her varying circumstances. I marvel at how well she coped as she lived happily independently most of her remaining almost 90 years. I miss her.
Posted by joared at 5/10/2009 04:07:00 AM